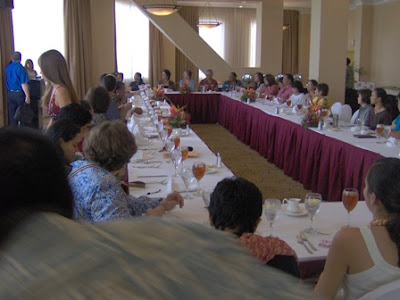 Watch these videos if you're worried about the future of Guam.

Guam's Non-Voting Delegate to the US Congress, Madeleine Bordallo says that her and others are in Washington D.C. are fighting right now in the best interests for the people of Guam. I sincerely doubt this. The only way in which we can assume this to be true is if that old colonial mantra, "what's good for America is good for Guam" is also true. But given the complex colonial history and present of Guam, we should all know this not to be true. There are moments where it can be so, where what the US wants with Guam, can benefit Guam, but there are also moments when this isn't true.

The impending military build-up, despite all of the glorious, drunken talk about how much "freakin" money it will bring to Guam, is one instance where frankly, we need to break away from the colonial logic that America and Guam's interests are the same. What Congresswoman Bordallo is doing in Congress right now shows a clear lack of fighting or defending of the interests of Guam, and more of a marketing of Guam, a selling of it off, or a advertising that its existence is for sale, for cheap and patriotic prices!!

If, you would like to see some people fighting for Guam and its interests, then please look at the videos below, of a meeting with Bordallo and the women's group on Guam, Fuetsan Famalao'an. In their confrontation with Bordallo, they know very clearly, the history of Guam, and that it is not one which would indicate that whatever America wants for Guam, is great and wonderful. They understood and know that the track record of the US military is Guam is mixed at best, with some successes and some failures, and any dealings with them, can't be approached with idealistic, optimism and trust. But instead with caution, and with a willingness to call out the military if it isn't being truthful or transparent, and a willingness to let it know that Guam has demands and they cannot simply be ignored or subsumed within whatever the military assumes or wants.

The meeting that is documented in the video took place last August on Guam, during the visit of Virgin Islands Congresswoman Donna Christensen. I had the privilege of attending the meeting and seeing the fireworks fly. I've pasted the article regarding the meeting which appeared in the Marianas Variety.

MILITARY expansion must come with a thorough study of its impact on the island's environment, healthcare, education and other social issues likely to be affected by the population surge on Guam, according to women activists.

They are also demanding transparency and an open line of communication with U.S. leaders.

The women's group, called Fuetsan Famalao'an, met with Guam Delegate Madeleine Bordallo and U.S. Virgin Islands Rep. Donna Christensen at the Outrigger Hotel on Sunday and discussed their concerns about the impending relocation of 8,000 Marines from Okinawa to Guam.

The Sunday brunch meeting, hosted by Bordallo, saw a gathering of 35 women representing various sectors of the community.

"We seek to bring to the center socio-cultural issues which tend to be marginalized in public discussion of the impact of military expansion," Fuetsan Famalao'an member Nicole Santos said.

Another member, Therese Terlaje, noted that "because this proposed military buildup is unprecedented, unprecedented attention must be given to all its consequences and impacts."

Members of the group are scheduled to hold another dialog with Bordallo and Christensen at the town hall meeting to be held at the Hilton Resort and Spa tomorrow.

"Congresswoman Madeleine Bordallo seemed surprised by the concerns that women presented during the Sunday meeting. She probably hasn't heard of them before. She was surprised to find out that many of us are opposing the military expansion," former Senator Hope Cristobal told Variety.

Lisa Natividad discussed the environmental degradation that resulted from the presence of toxic chemicals left by the military and the various diseases contracted by Guam residents as a result of the contamination from nuclear tests conducted in the Pacific in the 1950s.

"The reckless military practices of the past have taken their toll on the health of our people. Now Guam is again being asked to continue making sacrifices in the name of national defense," Natividad said.

At tomorrow's town hall meeting, Cristobal will present a list of recommendations to address a number of issues linked to the military buildup.

"Congress must responsibly address the cumulative effect of all proposed military projects together with past and current military activity and presence. The effectiveness of past mitigation efforts by the military should be assessed in order to determine the prudence of allowing future mitigation where adverse impact is expected," Cristobal stated in a written statement.

She also demands that the people of Guam be fully informed of the results of any environmental studies done or being done on Guam.

"A cumulative study is particularly important relative to past military use of our landfill and over 80 contaminated dump sites still existing on Guam that have yet to be cleaned up by the military, despite their placement on the U.S. Environmental Protection Agency cleanup lists for many years," Cristobal said.

At Sunday's meeting, Bordallo pointed out that impact studies, funded by the federal government, will be conducted, and reassured the group that "a final decision has not been made."

The women activists are also demanding the federal government revisit other recurring issues that have not been resolved, including the return of ancestral lands to their original owners and war reparations.
Famalao'an Lina'la' Colonies Militarism Zeien