Showing posts from April, 2010
Show all

Transporting a migrant in despair to a hospital could mean a volunteer is charged with human smuggling. A simple act of kindness like leaving water in the desert can be subject to penalties as well.

"We’re being intimidated and criminalised as humanitarians," said Walt Staton, a 27-year-old volunteer with No More Deaths, a humanitarian aid group.

Staton knows this firsthand. He was convicted on Jun. 3 by a 12-person jury of "knowingly littering" for leaving unopened water jugs on the Buenos Aires National Wildlife Refuge southwest of Tucson, Arizona.

Arizona, the main gateway for undocumented migration into the U.S., is ground zero to a human rights crisis, according to border activists. In the summer, triple-digit temperatures in the remote Sonoran desert have caused a deadly toll.

Over the past decade, it is estimated that at least 5,000 men, women and children have lost their lives attemp…
Post a Comment
Read more 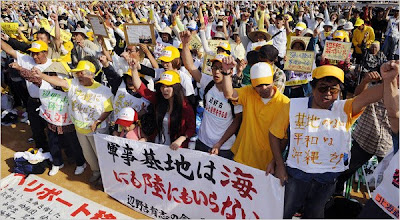 Two days ago, close to 100,000 people gathered in Okinawa to protest the US military bases there.

They were calling for the closure of existing bases in Okinawa and a protest against any further bases being built there.

A number of different solidarity protests took place around Asia and the United States. This protests joins others which are taking place around the Asia-Pacific region. The United States has been working towards consolidating and expanding its presence in this part of the world for years now and so its very good to see people from everywhere, at all levels responding and speaking out.

The fact that I can't read Japanese language newspapers or websites makes it difficult sometimes for me to gauge how people are articulating their critiques of the US military presence. Politicians and activists who come through Guam are always very mindful of not saying something which is most likely a central narrative point in these resistance to the US presence. That Guam is the clo…
1 comment
Read more

April 25, 2010
In my Guam History class this week we’re getting to one of my favorite periods of Guam’s history, but one which my students usually don’t like hearing about. It’s the pre-war American period, from 1898-1941, where the United States controlled Guam and ran it like a Navy base, with Chamorros forced to go along for the ride. The government of Guam during this period was an autocratic Naval regime where a single man, the Naval Governor, had complete control over the island, and whatever he said, went. Most of these Naval Governors didn’t give a crap about Guam and were only here for a year or two and so didn’t do much. Lao despite that caveat, this is still a very screwed up and racist period of Guam history. One where, the racism of the United States is not some abstract thing we hear about as being conquered by Martin Luther King Jr. and Barack Obama, but something that was literally scrubbing the tongues and policing the fields and gardens of Chamorros who are still alive today.For th…
Post a Comment
Read more 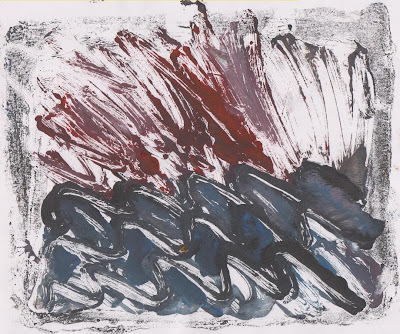 The painting above is called "Samehada Strikes." If you are a geek or a fan of the manga Naruto then you may know what Samehada refers to and therefore what this abstract image is named after.
If not, you can still enjoy this somewhat brutal image, which appears like the waves of an ocean, with a geyser of blood emerging from behind them.
I painted this piece and a number of other pieces last weekend in preparation for an event coming up next month called Otaku Recon. Its a manga, video games and anime event which will be held on May 15th at the Holiday Resort and Spa in Tumon. For more information you can check out the website by clicking here. There's plenty of info and links to check out. They'll be cosplay, contests, screenings, and what I am most excited about, artist displays and tables.
For the past few months, because of work, family and dissertation related afflictions, I haven't had much time to create art. I've made a little here and there, such as I…
1 comment
Read more

The Long and Winding Road 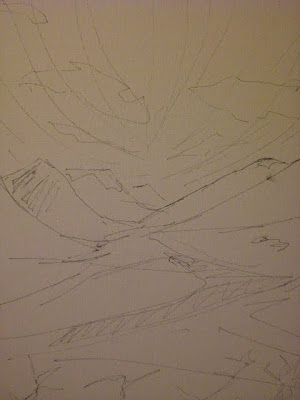 Last week, I finished what was literally a long road in the course of my life, when I officially stopped being a student and completed my dissertation. I've been in college in some form or another for 13 years straight now and so I am very much looking forward to this period of my life where hokkok i umestudiante-ku, or I'm through being a student.

I first started college in 1997, at Cuesta Community College. I spent three semesters there before transferring to the University of Guam. By spring of 2001 I graduated with a double major from UOG in Fine Arts and English/Literature. While I was an undergraduate at UOG, I had two one-man exhibitions of my artwork, the first in 1999 titled "Typhoon: An Island's Intensity" and the second in 2001 titled "I Matan i Kuttura Siha." I was most known during this time for having paint on my clothes all the time, and some people still remember me as "that painted guy."

From there I jumped into the Micronesian …
2 comments
Read more

An Earth Day Letter to President Obama on Behalf of Guam

On Earth Day, April 22, 2010, we—the undersigned environmentalists, scholars, clergy and community leaders—call attention to the severe long-term impacts of preparations for war on the physical environment and, in turn, on human health.

We are extremely concerned about the environmental impacts of the proposed military expansion and build-up in the U.S. territory of Guam , noting the following points:

History of US Militarism in Guam :

Ø The people of Guam have lived under U.S. administration since 1898. Guam remains a U.S. colony, one of 16 non-self-governing territories listed by the United Nations, and represented by one non-voting delegate in the U.S. Congress. Local communities are highly constrained in their ability to influe…
Post a Comment
Read more 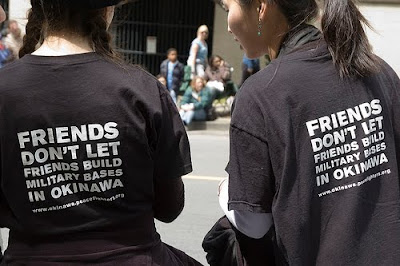 If you're in Washington D.C. later this month, consider joining this protest...

What: To protest a new US military base in Okinawa (Japan)
When: April 25th, Sunday at 2 pm
Where: In front of the Japanese Embassy
2520 Massachusetts Avenue, N.W.

The new Japanese government, pressured by the US, seems to be leaning toward building a new US military base on Okinawa, which is a tropical island in Japan. The people of Okinawa, who already host more than 30 U.S. bases, don't wa…
Post a Comment
Read more

The Military Buildup Bubble: or, I'm Looking Through You...

April 15, 2010
The DEIS comment period created the impression of a significant amount of people being against the buildup or changing their opinion on the buildup, or being more engaged about it. Since the period ended, much of that feeling of things moving or shifting has changed or evaporated. The comment period did after all provide the perfect space, a window of time and a series of public events where a new image of the island could be forged.

Since that time however, I've heard regular complaints from all sectors of society, that the feel of things moving or changing, or as I've written on this blog, of the buildup "breaking down," was not real, was all just media manipulations and spectacles of dissent. That public opinion on the buildup has always been taihinasso positive, and overwhelmingly supportive. That although the surface of public opinion may have changed from November of last year to February of this year, this is the work of a small minority of people, who staged p…
Post a Comment
Read more

“FAMOKSAIYAN” can be understood as the time to paddle forward or to nurture.

In April 2006, a group of Chamorro & Micronesian scholars, organizers and workers held the first annual Famoksaiyan conference at the Sons and Daughters of Guam in San Diego, California. The conference focused on the issues of self determination, education and mi…
Post a Comment
Read more 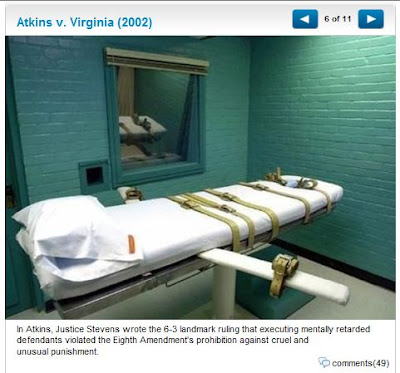 I've been living back on Guam for more than a year and a half now, and while I've become immersed in Guam politics and issues, my knowledge of national or regional politics in the states has taken a hit. While I was living in San Diego for five years while in grad school, I eagerly followed the ideological battles between Democrats and Republicans. This following culuminated in the presidential election in 2008 which ended up consuming my blog for a year.

I used to be able to name 90 of the 100 US Senators and close to a 100 of the members of the House of Representatives. Nowadays however, when I try to recall who is the junior Senator from whichever state, I'm pretty sure I'm just making up whatever name I recall (unless its someone who has been there for ages). For instance, I have no idea how it came up in a conversation, but last fall, a student who had gone to school for a year in Pennslyvania asked him if I knew who the Senators for that state were now. I mistaken…
Post a Comment
Read more

Act of Decolonization #17: Self Determination and the Dead

April 06, 2010
Thankfully, it has been a while now since a soldier from Guam was killed in the current slate of US Wars on Terror. But as the US prepares to increase its presence in Afghanistan, I cannot help but think back to several years ago, when the wars in both Afghanistan and Iraq were in full force and it seemed like someone from Guam or from Micronesia were dying every month. I remember writing several emotional and sometimes angry posts about the way these precious lives were being wasted on imperial ventures.

For obvious reasons, these sorts of posts are very difficult and sensitive, for so many reasons. Malingu un lina'la'. A life is lost. A Chamorro life is lost. A Chamorro life is lost fighting for the United States, which has been and continues to be his or her colonizer. A brown body is lost fighting other brown bodies, usually for the sake and interest of rich white people, or at least rich people. Lastly though we reach the most difficult point, which I articulated several y…
Post a Comment
Read more
More posts