Showing posts from April, 2017
Show all

April 30, 2017
I have too many things to do this week to waste much "ink" on Dave Davis or his case on this blog, but that doesn't mean I am not writing about it in other forms. Here are some articles about the Davis case, the Respect the Chamoru People Rally and also a recent letter to the editor connecting Davis' case to a longer history of disrespect that Chamorros have experienced.

"A lot of the Chamorros here and the community feel (the ruling) was an attack on them, calling us racists for not allowing somebody to register to vote in our plebiscite or register land." – Amber Benavente-Sanchez, rally organizer Hundreds of people descended on the pristine front lawn of the governor's office at Adelup late yesterday afternoon to join the "Respect the CHamoru People" rally that was being held in response to a March 8 District Court of Gu…
Post a Comment
Read more 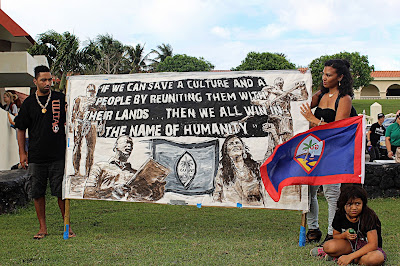 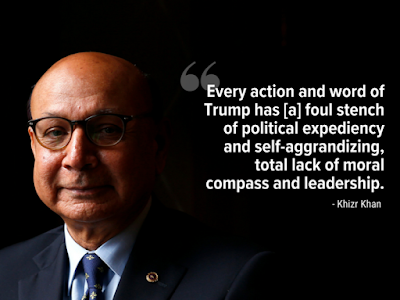 Commentary from 44 different political leaders, community activists and artists about what Trump has or hasn't accomplished in his first 100 days. Some very insightful remarks.

In October 2016, before Donald Trump defeated Democratic presidential nominee Hillary Clinton, he outlined a plan of all the things he hoped to accomplish during his first 100 days in office.
But in the wake of failure and unfulfilled promises as his 100th day approaches, the president has changed his tune. Last week, he criticized “the ridiculous standard” of the first 100 days, slamming the deadline in one sentence.
To mark the milestone, HuffPost asked lawmakers, activists, lobbyists and influencers to offer their own (roughly) one-sentence takes on Trump’s first 100 days.
Here are the responses, which have been lightly edited for clarity and style:
Khizr Kh…
Post a Comment
Read more 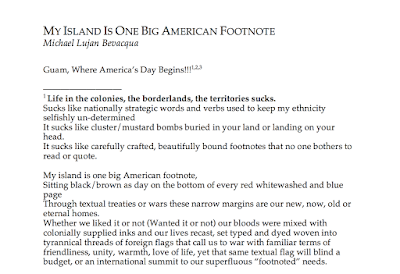 A few years ago two of my poems were featured in a creative/scholarly anthology titled The Space Between edited by Marata Tamaira. It was one of my first academic publications and I was honored to be included in it. I recently came across this interview that noted Chamorro poet and scholar Craig Santos Perez did with Marata following the release of the anthology. Craig recently asked me if I'd be willing to have one of the poems that was featured in the anthology, "My Island is One Big American Footnote" to be included in a new Micronesian anthology that he is co-editing. In many ways, this poem fit the theme for the overall anthology, as that concept of the space between can be used to understand the liminal place of something, the marginal and confused positionality. Yet it also can evoke an intimacy, as close of connectedness and love. 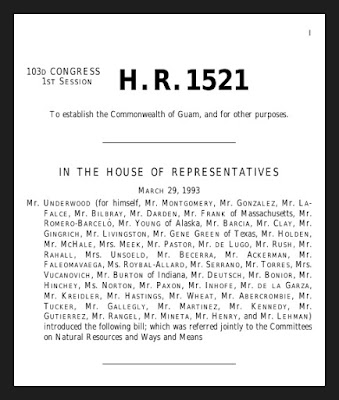 Commonwealth is a word that continues to haunt discussions of decolonization in Guam.

For most younger people, they have no idea what Commonwealth means in a Guam context, although they know of it in the context of the CNMI's political status.

It is something that has some very profound meanings for people of a certain age, most older than I am, because of the way it represents nostalgia for a time when political status change on Guam seemed to have a more clearly defined direction.

Commonwealth in terms of Guam, was a decades long movement to try to get the island to a new political status, something along the lines of "improved status quo."

It involved long negotiations with different presidential administrations, different iterations of Congress, all in the hopes of moving Guam to a slightly better political position.

In terms of political status options, Commonwealth would fall between integration and free association. It kept Guam and the US tightly connected, but …
Post a Comment
Read more 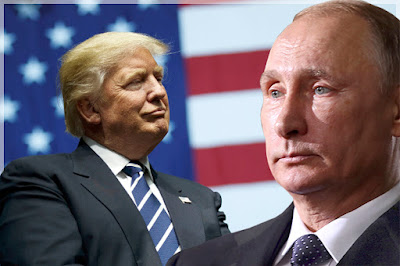 Donald Trump has a way of bringing diverse groups of people together, for good or for bad reasons. I have felt this quite profoundly in the way that in my own distaste and loathing for Trump, I am now willing to feel ideologically similar to those who are very much defenders of American imperialism, but against the chaos that Trump has brought to American interests and power structures. Mind you, this chaos will have no positive effect on rich and power in the US, but it is affecting the relationship between the governed and those who govern and the US and its allies. On the one hand, I am against Trump intentional or accidental efforts at destabilization, but this is something that I would desire in the context of Guam becoming independent or ceasing to be the tip of America's spear. An interview such as this, from someone who worked within the machinery of American national intelligence, would have likely never appeared on this blog in the past. We shall see how long this game …
Post a Comment
Read more
More posts