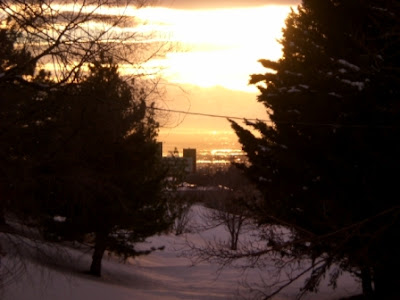 I'm freezing i dagga-hu off right now at the University of Utah, attending and presenting at the Pacific Worlds and American West Conference, that's taking place as I am typing.

As I'm typing I'm actually listening to one of the panels (hunggan achagigu, ya cha-mu uma'alok na tairespetu yu'. Hu e'ekungok mientras mantypetype yu'). The panel that's going on right now is very interesting, exploring issues of gender and sexuality in the Pacific, focusing on mamfloritas in Guam, the life of Chamorro modern na maga'haga' Agueda Johnston, and the linking of haka dances with aggressive masculine sexuality through football. The conference in general is very exciting, I'm seeing alot of friends since the circle of Pacific Islander scholars out here isn't very large. I'm also learning alot about other Pacific Islander groups in the United States, in particular Samoan and Tongan who have large populations in Utah. 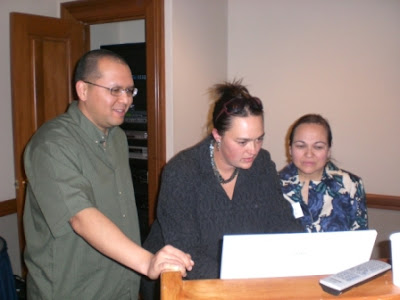 I spent part of the morning talking with a scholarship program director from the University of Utah here who has worked for many years with the 200 + Pacific Islanders that attend this university. Despite a fairly large Pacific Islander population for a large university and with Pacific Islander male students holding alot of social capital because of their visibility on the athletic teams, getting the students organized has been a constant battle. There are the same old issues of authenticity vs. modernity, where those from the islands feel the ones raised out here aren't "really" Tongan or Samoan. While those from the states feel that those from the islands are backwards and FOBish.

Then there are the issues of the cultural vs. the political, where students differ over what their role in a multi-cultural America is supposed to be. Pacific Islanders are becoming more visible in the United States, as I've already mentioned as atheletes, but also in certain cities as gang members or violent youth. You add these two forms of structural/racial recognition to the long established expectation of Pacific Islanders as exotic bearers and performers of culture, and Pacific Islander students on college campuses are more and more being put into a difficult position.

As small minorities, small, largely invisible groups, this new visibility can be very seductive and even comforting, as if at last because a High School football team is doing the haka before their games, Pacific Islanders and their rich traditions and histories have been recognized!! These forms of recognition, where Pacific Islander cultural forms, norms, ideas, icons and practices are being "liberated" from their narrow existence attached to a single island group, or a larger collection of groups, and being circulated by a larger more national community, seem to infer that a rite of passage is taking place.


As Pacific Islander clubs pop up around colleges in Utah, Oregon, California, Arizona and Washington state, its as if a place setting at the multi-cultural table of America, has at least been made for Pacific Islanders, and so now islanders every where are eagerly , with their cool tattoos, bulky bodies, flowers in their hair and sometimes hard to pronounce names, accepting this new place.

Returning to the cultural and the political problem, this new place setting for Pacific Islanders in America, is absolutely a cultural one. It is one which acknowledges that islanders have "really cool" culture, and that they contribute to richness of the United States by having luaus, performing at parties, providing great food, and kicking ass at football. The dilemia that Pacific Islander student groups find themselves in, is whether to accept and celebrate this position, or to try and go beyond it.

As I often write on my blog, this is a struggle I find all the time with Chamorros, in Guam, but mainly in the United States. And interestingly enough this conversation that I had, is very closely related to the paper I'll be presenting tomorrow at the conference here. My paper will discuss these divides between the political and the culture, and their role in continuing the colonization of Chamorros, even when they leave Guam. It will also discuss what Chamorro organizing is going on in the United States, is it social or political? Does it use decolonization, and if so, how? I'm pasting my abstract below.

Wish me luck, not so much with the paper, but more with the cold and the snow!!!!

The island of Guam remains one of the world’s last “official” colonies. Its indigenous inhabitants, the Chamorros exist as ambiguous subjects within the margins of American Empire, distant geographically and neither foreign nor domestic. They are colonial citizens, with no representation in the U.S. Federal Government, yet live at the mercy of its mandates and its military, who occupy 1/3 of their island.

A century of American colonialism in Guam has helped create a large Chamorro disapora in the Western United States concentrated primarily in California. This diaspora has been produced in successive waves since World War II, driven primarily by military service and now consists of some 90,000 people with the largest populations being in San Diego, the Bay Area and Long Beach. Over the years, various social, religious and civic organizations and community groups have formed to bind Chamorros in the diaspora to each other and through different village associations Chamorros to their islands in the Pacific.

This paper, primarily through interviews will provide an overview of this California Chamorro diaspora, and answering the following questions. First, how have Chamorros in California, traditionally either engaged with or rejected notions of decolonization in their community development given the continuing colonial status of their island? Second, how have colonial binaries such as political/cultural, social/political helped structure the ways in which Chamorros in the United States would organize themselves? Lastly, how are young Chamorros today, in their activism using the concept of decolonization, and is this usage relevant and effective? 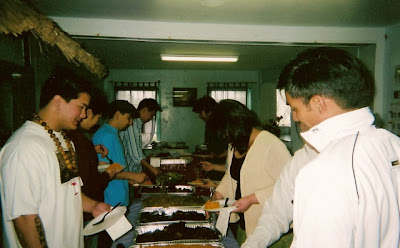