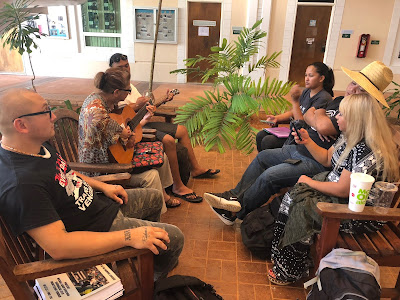 For the past few months my Saturday morning Chamoru coffee shop classes have been structured around two activities. Each class begins with the translation of a Chamoru song into English. Usually the students get to the pick the particular song, or at least the type of song. Second, we go through a longer narrative, sometimes a story, a speech or a poem in Chamoru and also spend time translating it and practicing reading it.

As a result of this, I've been translating lots of Chamoru songs lately. When I first started learning Chamoru, gi minagahet, I was terrible at transcribing Chamoru songs. I hadn't grown up with the ear for hearing or catching Chamoru and so my transcriptions of songs were often wildly inaccurate. For the first few years I had people both politely and impolitely correct my attempts at transcription and then translation. My ear for Chamoru has gotten better, but I still struggle sometimes with particular artists who may have their own flair for pronunciation or emphasis.

What this regular transcription and translation of Chamoru music has ended up doing, is giving me a greater sense of the Chamoru music landscape. Firstly, it is obvious that while Chamorus continue to make original and new music, far less of it, is in the Chamoru language. This isn't because Chamoru attitudes about their language are negative, but rather because the upcoming generations of artists aren't fluent in Chamoru and so trying to sing in Chamoru often times opens them up for weird criticism. Many young artists will avoid it, since while they can sing the songs they grew up with at fiestas, they will often times get the words wrong or simply have no idea what they are saying.

But we still have decades of regular releases by Chamoru musicians since World War II. Some of them released multiple albums and are mainstays, a few dabbled in the recording arts, releasing one album, by themselves or with some friends. We see the many influences in all those songs. We see the influence of country music, rock, pop even some disco. We see the older influences as well, the old Chamoritta stylings, the wisdom of the elders sometimes quietly sprinkled in contemporary lyrics. We see pride in being from Guam or the Marianas and some growing pride in being colonized by the US and feeling patriotic attachment to it.

We see a good deal of love songs, most of them sad love songs. Songs about love lost, infidelity, love never requited. Taking from the older sensibilities from the Spanish period, they mix with Chamoru overall feelings of powerlessness and lack of recognition to create a landscape of somber love songs. Chamoru music has been such an integral part of Chamoru identity, and a part of keeping it vital since World War II in particular. As I've written before, whereas Chamorus were eagerly throwing away much of what had come to define them prior to World War II and seeking to embrace Americanism in any way possible, music was a domain for adaptation and revitalization. Chamorus were preventing their children from using the language or actively not using it with their children, but they were still using it for music and still associating it with enjoyment and social life. This is changing unfortunately, although we are seeing places where music, primarily in the form of chants and dances is becoming an integral part of public life.

One of the most common names for Chamoru love songs is "Ai Neni," by my most recent count I've found five distinct songs by Chamoru musicians that have this name. For my Chamoru class last week we looked at two versions of "Ai Neni" one by Frank "Bokkonggo" Pangelinan and the other from the group Mixed Plate. The one from Bokkonggo touched emotionally as we worked on it for a few reasons. It is clearly a romantic song, as in a song about love lost as a relationship comes to an end, but hopeful that it may begin again. But as I took note of the lyrics, I realized that you could shift them slightly and it could be a heartfelt song about someone leaving, like a child going off to school or joining the military.