For Immediate Release, November 24, 2019- Independent Guåhan (IG) invites the public to attend their upcoming General Assembly (GA) to take place on Thursday, December 5th from 6:00-7:30 pm at the Main Pavilion of the Chamorro Village in Hagåtña. For this GA, the group will honor as Maga’taotaothe late Tony “Submariner” Artero, who was a US Navy veteran and also a strong community activist in pushing for political status change in Guam. In honor of Veteran’s Day, this GA will also feature an educational discussion on the voices of Chamoru veterans and decolonization.

Tony Artero was a veteran, a war survivor and an entrepreneur, who was part of the Artero family that helped hide US Navyman George Tweed during the Japanese occupation of Guam. Although his father received the Congressional Medal of Freedom for the risks he took, soon after the US military condemned huge tracts of the Artero family’s land. Mr. Artero saw this as an injustice and became a vocal critic of the actions of the US and local Guam governments that he saw as infringing on the basic human rights of Guam’s people.

While testifying in 1995 before the United Nations, he connected his service in the US military to his activism through statements such as this, “Like my ancestors, I am always ready and willing to answer a call for action to defend liberty, justice, freedom, human rights and the principles of democracy. I feel that I have already displayed that virtue in my 21 years of service in the Navy, and will continue as long as I am able.  Also, like the founding fathers of America did, I am standing up against the wrong-doings of my government, which I believe to be the greatest form of patriotism.”

In this spirit, the educational discussion for the evening will focus on the role of Guam’s veterans in pushing for Guam’s decolonization. As Guam veterans have served and sacrificed for the United States, they have also developed a sense of responsibility and obligation to important principles and ideals. Sometimes this has led to Chamoru and local veterans speaking out against the policies of the government that they once served. Former Senator Fernando Esteves and attorney Peter Santos will be presenting on this topic, having both served in the US army, but are also committed to helping Guam achieve a new political status. This presentation will also dispel myths that if Guam decolonized veterans would lose their benefits, by looking at other countries such as the Philippines where US veterans often receive better care and benefits than those in Guam and Micronesia. 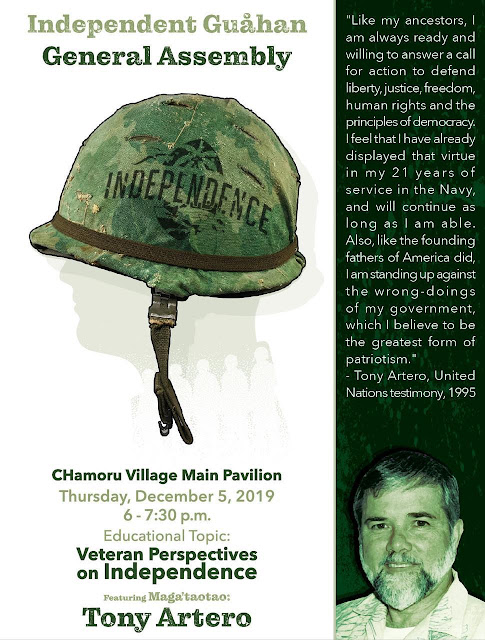