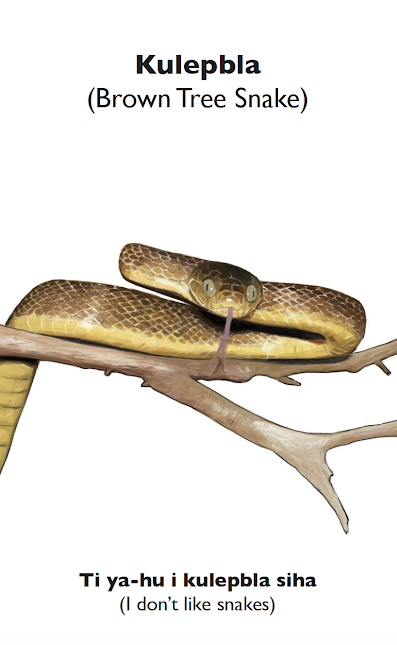 There are certain things in Guam and Chamoru life and history that exist as such potent and powerful symbols to illustrate reality, whether negatively or positively. You could argue the Karabao is one such positive image. Even the latte or the såkman/galaide'.

But when it comes to these types of negative symbols, you have the old standard, the vague image of island thieves or ladrones. But you also have two very powerful and obfuscating symbols that are more recent, from just the past century, that of SPAM and the brown tree snake.

I was in a virtual symposium last week where I talked about Spam as a way of talking about islanders and their relationship to everything from militarization to colonialism to the impact of capitalism and consumerism on everything from the land, the culture to the body itself.

The brown tree snake possess a similar sort of potential in talking about the impact on the island of Guam or the Chamoru people, their natural resources, by invasive species. It is a universal story for sure, the "fatal impact." But the snake is a very appropriate symbol for the way that impact has hit Guam. Most likely brought to the island on US military cargo ships from Australia or New Guinea, within a generation it was always damaging the native bird population. Within two generations, the brown tree snake, combined with human development destroying the natural habitat for many native birds, led to several species becoming completely extinct on Guam.

But the snake is an apt metaphor in another way. It becomes a hyper visible symbol that ends up representing the island. A shortcut if you will. Guam is a military base - or Guam is an island of snakes. This even then extends to how it provides a cover to the US military or the federal government in terms of continuing to control Chamoru lands in the name of eradicating the snake. It is an imperial ouroboros.

While doing some research this morning for the Guam Museum, I came across this article from CNN in 2002 about the brown tree snake. I think this was before the started putting Tylenol in mice with parachutes.

CNN) -- They creep up utility poles, slither into toilets, scale fences and hunt down their prey, usually birds, with striking success, attacking most often in the dark of night.

Most of the damage done in Guam is irreparable. And authorities fear the ecological disaster could just be beginning if the mildly venomous snakes escape the island and then reproduce in large numbers.

Placing thousands of traps throughout Guam, authorities have reduced the number of snakes in some of the island's more "high-risk" areas. But the U.S. government's visible efforts to curb the slithering species' migration -- including snake-sniffing dogs and specially designed "snake-proof" fences at Guam airports and ports -- have not been a total success.

Authorities said the snakes have colonized at least two other islands near Guam, and have been captured at airports in Hawaii, Texas and Spain. Michael Kuhlman of the Guam Department of Agriculture says the snakes would particularly thrive -- and would be near impossible to root out -- along the U.S. Gulf Coast.

"Really, people don't understand what this animal is capable of doing," said Mike Pitzler of the U.S. Department of Agriculture.

All the brown tree snakes in Guam, according to DNA studies, descended from a single female who apparently stowed away in a shipment of military cargo from New Guinea about 50 years ago.

The snakes, the longest of which measured 10.5 feet long, are characterized by their "very prominent eyes," explained Kuhlman.

Because the snakes are nocturnal, most people -- including the thousands of tourists who visit Guam every year -- have never seen them. But the snakes have had a definite human impact, causing frequent power failures and even infiltrating some homes.

Yet the brown tree snake typically avoids humans, instead prowling the forests to feed on wildlife that evolved in Guam without any defenses against a predator like this.

The Guam rail, a flightless bird unique to the island, is one of the 10 species of birds on the island that the snake has hunted to extinction.